Recovering from PyCon Canada 2019, and the holidays took longer than I expected. However I am pleased to announce the release of version 0.17.0 of Rookeries to start off this new year!

Version 0.17.0 includes a number of improvements to the serve command:

In addition, I added:

If you are running version 0.16.0, you can run a re-install using the rookeries-online-installer.sh to update to the latest version. Otherwise you can install v0.17.0 by following the instruction on the Download page.

As for what I plan to work on next, I want to improve the infrastructure around downloading, installing and working with both plugins and templates. I will be using my new site for my Juggling JSON with jq Cookbook ebook as a test bed for improving working with Rookeries. That way I have some real use cases outside of Rookeries’ project page. I am looking forward to working on both projects and see how they both develop in parallel. 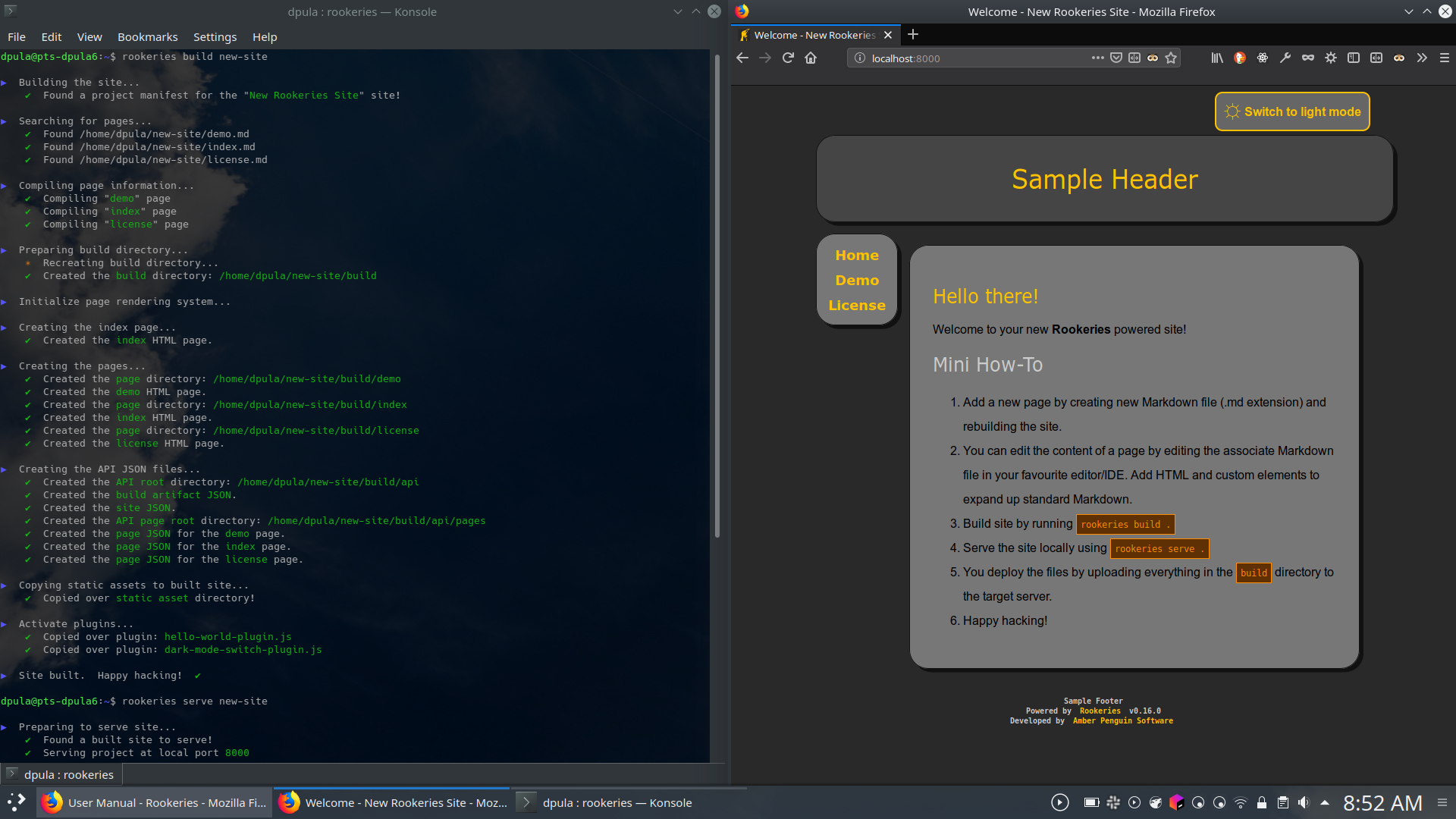 It turns out that rewriting a CMS into a static site generator takes a bit of time. 😉 After 3 months of silence, I can finally announce the long awaited release of version 0.15.0 of Rookeries. This release is the first fully functional technical preview of the static site generator!

You can now create, build and develop a full site with Rookeries! In fact I rebuilt the Rookeries site, using Rookeries to prove out the concept. You start by using the generator to setup a new project. Then you can add Markdown files to build new pages to an existing site, change the HTML and CSS templates, and run a build which creates a modern site. A site that in essence is a server-side rendered single-page application. So if you are running Debian or Ubuntu Linux you can try it out Rookeries by installing the deb package.

Now, this release is a technical preview release to demonstrate the concept. I plan on making the template and plugin systems more flexible. Also I want to improve the usability by adding an automatic rebuild when a page is edited. And I need to write proper documentation as well. Support for other operating systems and distributions is also in the works. However already Rookeries is significantly faster than its nearest competitor: GatsbyJS and smaller in size. And you get a nicer, more maintainable site than from many other tools.

So please take Rookeries for a spin, and let me know how you like it!

That took longer than expected… but I’ve finally migrated Rookeries to use PostgreSQL 10! I finished the majority of the raw migration work about a week before PyCon Canada. However I did not want to confuse my updates and tweets related to PyCon Canada with my work on Rookeries. Also I wanted to add a few bits of polish, create a mailing list for Rookeries and fix up any issues I found with the site. (Quite a few data and TLS certificate issues happened along with this release.)

I found that migrating Rookeries from CouchDB to PostgreSQL quite challenging. This adds yet another data point to those that argue that fixing data models and databases can be significantly harder than fixing applications. One of the challenges I stumbled in was mapping the various keys in a CouchDB document for a resource, into a table. Fortunately the JSONB columns allowed for the flexibility to let me resolve some of my earlier problematic data designs later on. I also needed to familiarize myself with diesel.rs, the amazing ORM/database engine library for Rust. I struggled with understanding how custom types worked in Rust, and why they make database mapping of columns easy for more advanced mappings (like optionally nullable, JSONB and Array). However I managed to figure out even the hard parts using a combination of the documentation and by peeking into the test cases for diesel. Having a migration tool in the companion diesel-cli utility, provides the nicest UX for building out database migrations and mapping them to code. Overall the effort paid off and I am convinced that Rust has one of the cleanest and maintainable ORM/database libraries I’ve seen.

As mentioned earlier, I created a mailing list dedicated to Rookeries updates. I will continue to blog about releases, but if you are interested in the internals and development of Rookeries, then this mailing list a good thing to follow. Consider it like a journal that you can also reply back to and enter in a conversation about the development of Rookeries. I added a panel to the side of the site, that makes subscribing to Rookeries easy.

This will hopefully will be the last of the major technological shifts for the project, at least on the backend. The next releases I plan on concentrating on getting Rookeries in a state where I can drive Gatsby powered static sites via REST APIs. Once that becomes a reality, I will work on replacing my WordPress sites with Rookeries powered sites.

6 days after I blog that the MeeGo project should start with a release of MeeGo as a first step… well they do exactly that.  Now before everyone goes off and tries to flash their nifty Nokia N900, please don’t.  This first release is just the underlying stack, without any GUI elements.  As in if you flash your device to this first release… you’ll get a console with a blinking cursor.  Now I don’t know about you… but I don’t know how to make a phone using the console.  Still great work MeeGo folks.  I look forward to seeing the upcoming release with the MeeGo User Experience, to see how the system will look once it becomes something an advanced end-user can use.

Hurrah! Ubuntu 9.10 is now officially out there for everyone to grab and enjoy. I’ve been using this release since beta, and I can vouch that is an awesome release. Anyways, go to http://ubuntu.com/ and grab yourself a copy.

Ladies and gentlemen time to rev’ up those installations!

Good morning! So I have two goodies (one of them is not really my work but I still want to share it with you) to give today.

First thing is the release of Ubuntu 7.10. And in extension also Kubuntu 7.10, which is what I use. As I mentioned before, this is another sweet release. So get yours while its still hot!

Second gift is this post. Thats right, this is post number 150! I wanted to do something special to celebrate this. But yes, I had nothing interesting to report. And this release, makes the post newsworthy. Yay!

Y’ all have a great day, yah hear?